Medicinal use of Witch Hazel: Witch hazel bark is a traditional herb of the North American Indians who used it to heal wounds, treat tumours, eye problems etc. A very astringent herb, it is commonly used in the West and is widely available from both herbalists and chemists. It is an
important ingredient of proprietary eye drops, skin creams, ointments and skin tonics. It is widely used as an external application to bruises, sore muscles, varicose veins, haemorrhoids, sore nipples, inflammations etc. The bark is astringent, haemostatic, sedative and tonic.
Tannins in the bark are believed to be responsible for its astringent and haemostatic properties. Bottled witch hazel water is a steam distillate that does not contain the tannins from the shrub, this is less effective in its action than a tincture. The bark is used internally in the treatment of diarrhoea, colitis, dysentery, haemorrhoids, vaginal discharge, excessive menstruation, internal bleeding and prolapsed organs. Branches and twigs are harvested for the bark in the spring. An infusion of the leaves is used to reduce inflammations, treat piles, internal haemorrhages and eye inflammations. The leaves are harvested in the summer and can be dried for later use. A homeopathic remedy is made from fresh bark. It is used in the treatment of nosebleeds, piles and varicose veins.Edible parts of Witch Hazel: seed – raw or cooked. An oily texture. The seeds are about the size of a barley grain and have a thick bony coat.
The reports of edibility must be treated with some suspicion, they all seem to stem from one questionable report in the “Medical Flora” of Refinesque. A refreshing tea is made from the leaves and twigs.

Other uses : The plant is very rich in tannin. It is used cosmetically as an ingredient in almost any preparation made to relieve capillary weaknesses. The stems have been used for water divining. Wood – heavy, hard, very close grained. It weighs 43 lb per cubic foot. The trees are too small to be a useful lumber source. 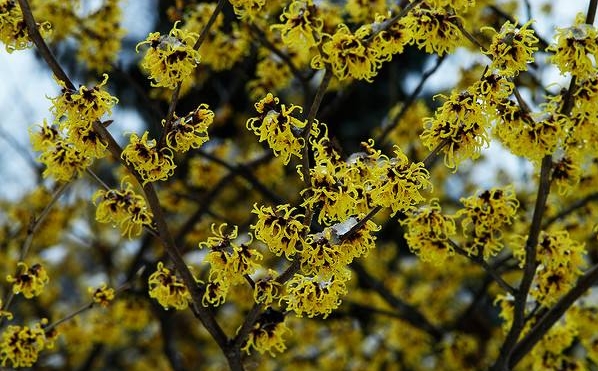