Native to tropical Africa, it has become naturalized throughout the tropics now more so as an ornamental. It is an erect well-branched sometimes robust perennial herb (in warmer regions) or subshrub growing up to 9′ tall. The stem terminates in an elongated yellow Flower spike. The leaves are trifoliate and seed pods that when dry will rattle if you shake them, hence the common names. Easy to grow, tolerates harsh sites, poor soils, drought and some freeze.

Flowers are eaten as a Vegetable in Cambodia, where the seeds are roasted and grounded for use as a sort of coffee beverage. The roots are sometimes chewed with betel nuts in Vietnam. In traditional medicine, the plant is used to treat urinary problems and fever, a poultice of the roots is applied to swelling of joints and an extract of the leaves is taken to expel intestinal worms. As with other pollen, the pollen from this species may also cause an allergic reaction in humans, including swelling of the eyes and face, a rash on the neck and shoulders, and itching. This is for informational purposes only and should not be used as medical advise.

The plant is grown as a ground cover and a green manure crop, especially in the inter-rows of rubber trees and coconut palms. It is a legume and very good at improving poor soil. The seeds are said to have low concentration levels of alkaloids that may effect the liver or possible kill birds and mammals. The leaves also contain alkaloids that are suspected of poisoning sheep, goats and cattle. However, the dried leaves are said not to be toxic. A fermented product known as ‘dage’ is made from the seeds where they are boiled for two hours, then wrapped in banana leaves and left to ferment for several days to remove poisonous components.
The colorful bella moth (Utetheisa ornatrix) loves Crotalaria! Their larvae feed upon it and use the toxic alkaloids to gain protection from predators, a protection that carries over into the adult moth as well. Overall good for attracting butterflies. 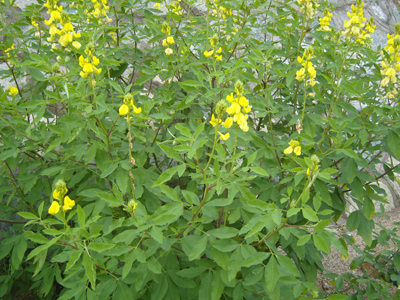