Overall a beautiful perennial, deciduous tree of the legume family (Fabaceae). After the leaf-fall, flowers appear on long stalks (8-12cm) from the ends of the new shoots. These are faintly scented like orange blossoms. The petals are cream-yellow turning dull orange. The pods are long (15-20cm), curved and green, but don’t coil until they begin to split whereupon they also turn blackish. Bright red seeds will litter the ground and children are often attracted to them. These attractive seeds have been used as beads in jewelry, leis and rosaries. They were also used in ancient India for weighing gold. The seeds are curiously similar in weight. Four seeds make up about one gram. The ground seeds are used to treat boils and inflammation, as well as an industrial lubricant oil.

As a food source the young leaves can be cooked and eaten. They are also used to supplement animal fodder, or mulched to fertilize crops. The raw seeds are toxic and may cause intoxication, however they are roasted and boiled in many cultures to be served with different dishes. It is said they taste like soy beans, are rich in oil and proteins, and can easily be digested by both humans and livestock.

Other medicinal uses include a red powder made from the wood is used as an antiseptic paste, and the leaves are used to treat gout and rheumatism. The bark is used to wash hair.

The hard, reddish wood is used to make cabinets, boats, and furniture often in place of true Sandalwood. With exposure to light, the wood slowly turns purplish-red. It is also valued as firewood as it burns well. 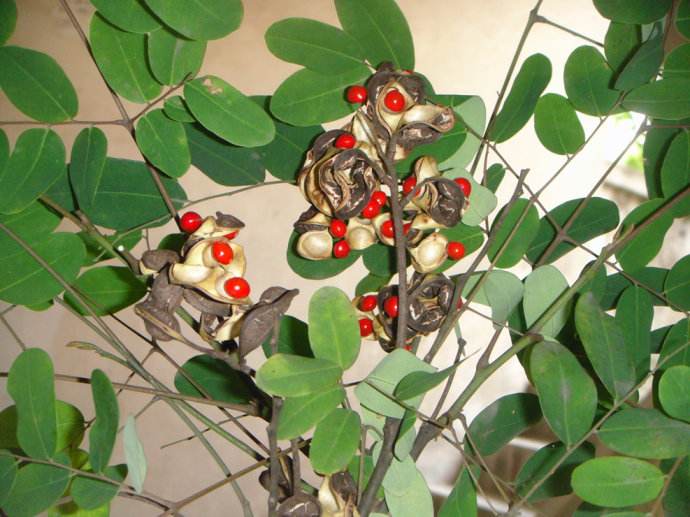