Here is an attractive, umbrella-shaped, spreading deciduous tree that can grow up to 40 meters tall, but is usually smaller. The straight, cylindrical bole is up to 90cm in diameter. Its distribution is from northern Luzon to Palawan and Mindanao, in most islands and provinces along the seashore and in semi-open forests at low and medium altitudes. Also reported in India to tropical east Africa through Malaya to northeastern Australia.

A multi-purpose tree, it is often harvested from the wild, providing a popular food, as well as medicine and a range of materials for local use. The timber is easy to cut, but not durable. It is used locally to make items like canoes and hut doors. Fibres extracted from the bark can be processed into rope. The leaves can be used as fodder. The plant is often cultivated as an ornamental in many parts of the tropics, even though its flowers are malodorous. Also used as a Bonsai tree that makes for a interesting potted plant.
This tree has many great features, beautiful foliage, smooth bark, and green/purple flowers. The large green pods will turn bright red with age and then split open to expose the olive looking seeds that will also turn color making for an ever changing show.

The large seeds are surrounded by a tough, parchment-like skin. The elliptic seeds are about 25mm long and 12mm in diameter at the center. The seeds can be eaten raw, roasted or fried. They are oily and have a pleasant, cocoa-like flavor, but are not bitter. When roasted, it tastes like peanuts. If eaten in too large a quantity, however, it can have a laxative to purgative effect. An edible non-drying oil is obtained from the seed. A bland, sweet-tasting, yellow oil with rather a high melting point. It has similar properties to, and can be used in the same way as, olive oil.
The rootstock of young plants can be eaten raw, in which it has a rich source of starch.

This species should be planted in fertile, well draining soil that is kept moist. Apply mulch near the base to help retain soil moisture. Specimens require large amounts of space to grow properly and make great shade trees. USDA Zone: 10 30° to 40°F (-1° to +4.5°C) 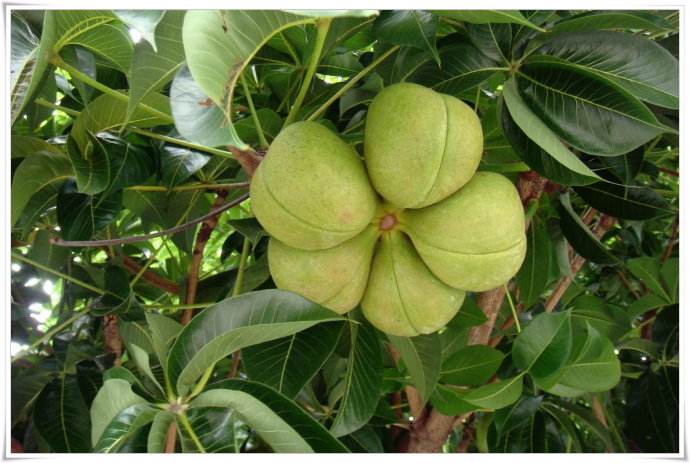