Research has demonstrated that Polygonum multiflorum can very significantly increase superoxide dismutase (SOD) activity. SOD is a powerful natural antioxidant and free radical scavenger that has been demonstrated to have powerful anti-aging benefits in humans. Polygonum multiflorum also inhibits b -monoamine oxidase (b -MAO). Both of these factors contribute to the anti-aging effects of this herb.

The tuberous root, the part of the plant used herbally under the name Polygonum multiflorum, contains lecithin and anthraquinones, free or conjugated. The root also contains more than 1.2% of a substance known as 2,3,5,4-tetrahydroxystilbene-2-0-b-D-glucoside, which is considered to be the principle active constituent.

Polygonum multiflorum is good to strengthen the muscles and tendons. It is also very beneficial for the nerves. It is used for backaches, knee joint pain, traumatic bruises, and neurasthenia. It has been used to lower blood pressure. Many people say it helps them to fall asleep at night also. The list goes on and on!

Polygonum multiflorum is a tonic for the endocrine glands, it improves health, stamina and resistance to disease. It is used to reduce cholesterol because of its lecithin. It is used for angina pectoris, bloody stools, hypoglycemia, diabetes, night sweating, schizophrenia, chronic bronchitis, epilepsy, head injuries, impotence, malaria, sores, cuts, and ringworm. It promotes red blood cells, helps rid intestinal parasites, and is good for resistance to cold.

Study 2: Polygonum multiflorum has been shown to slow down the aging of vital organs in aged animals, especially the reproductive organs, the ovary, the uterus and the testicle. The same formula also demonstrated significant results in open human clinical studies.

Study 3: In an attempt to prove Shou Wu`s legendary reputation as being able to reverse grey hair to black, Shou Wu liquor (dilute alcohol extract) was given to 36 people with gray hair. 24 completely recovered their dark hair and 8 more showed improvement. The total effective rate was of 88.9%. 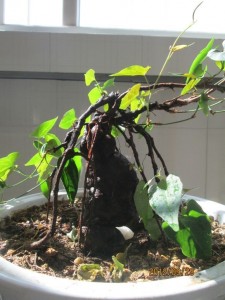