The name of the tree comes from the Osage tribe, which lived near the home range of the tree, and the aroma of the fruit after it is ripe.

This deciduous North American native tree rapidly grows 30 to 40 feet tall with a spread of 20 to 40 feet and creates a dense canopy, making it useful as a windbreak.

Before the invention of barbed wire in the 1880’s, many thousands of miles of hedge were constructed by planting young Osage Orange trees closely together in a line. Its usage as a large hedge tree in a row planting and the softball-sized fruits of female trees give it the alternative common name of Hedge Apple.

The trees can grow quickly in a good location with ideal growing conditions. They make a decent shade tree within ten years. If you are wanting to grow a hedgerow, plant them no more than five feet apart and plan to thin them as they get bigger.

Osage Orange grows in full sun to partial sun, and is found in zones 4 to 9.
Medicinal use : A tea made from the roots has been used as a wash for sore eyes. The inedible fruits contain antioxidant and fungicidal compounds. A 10% aqueous infusion and an extract diluted 1:1 have cardiovascular potentialities.

Other uses : A yellow dye is obtained from the bark of the root and the wood. Green and orange can also be obtained from it. The sap of the fruit is used as an insect repellent. It is said to be effective against cockroaches. The bark is a source of tannin. 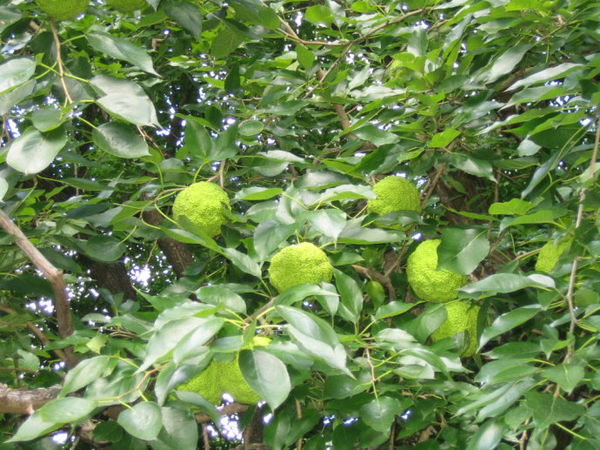