Chicory [ Cichorium Intybus ] is very easy to grow, in fact once established it will grow without any care at all. The plant will only make leaf growth the first year, and then will Flower the second year and successive season. Chicory flowers have blue blossoms consisting of ray flowers that are formed at end of stems and stem leaf axils, and the flowers are the most obvious in the morning and close later in the day. The flowers have numerous parts and are wide up to 1.5 inches. Blooms first appear in late spring and continue into mid fall.

Chicory [ Cichorium Intybus ] is cultivated since ancient times for its leaves, is used for salads. It is usually blanched by covering with litter to make it less bitter; whole or shredded leaves are served with oil and vinegar as salads; blanched hearts serve as a Vegetable. Root-chicory, established in Europe during, the Napoleanic blockade, is cultivated for roots used as a coffee substitute. When blended with ground coffee, they enhance the flavor and aroma of the brew.

Chicory is widely knows as an edible plant for medicines and cooking.

A food and medicine plant, going back to the ancient Egyptians, Greeks and Romans, who used the roots and the young shoots in spring like dandelion. Has diuretic, tonic and laxative properties, and is said to protect the liver from effects of excessive coffee drinking. Leaves yield a dye of clear blue colour, much like the colour of its lovely daisy flowers. 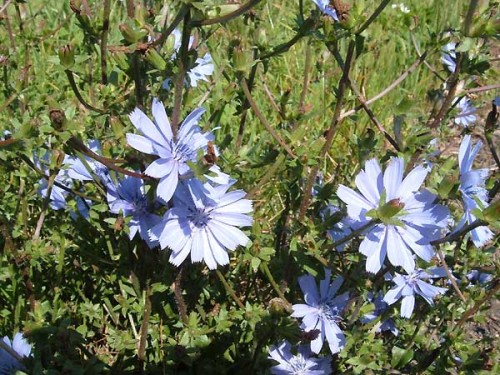